NXplorers is a Shell innovative educational programme that introduces young people to the complex and creative thinking needed to bring about positive change.

Focused on the Food - Water - Energy Nexus, the programme aims to build awareness, develop knowledge and provide thinking tools and complex problem solving skills to the leaders of the future. Shell Oman aims to raise awareness to energy problems and Inspire the Omani youth’s interest in STEM (Science, Technology, Engineering, Mathematics) at an early age to instill an innovative mindset and advocate for the relevancy of their role through education and entrepreneurship.

Shell worked together with the Ministry of Education and Engineering Village, a local SME, to implement the curricula in 10 current and future solar schools. The carefully developed programme has already benefitted around 600 students, and has equipped 20 science teachers and career advisors with the necessary information and methods to nurture the development of Omani youth.

In August 2018, Shaping Learning, Shell’s global and strategic training partner, successfully trained a team from the Engineering Village, an Omani SME to facilitate the NXplorers programme into schools under the "Solar into Schools" initiative. 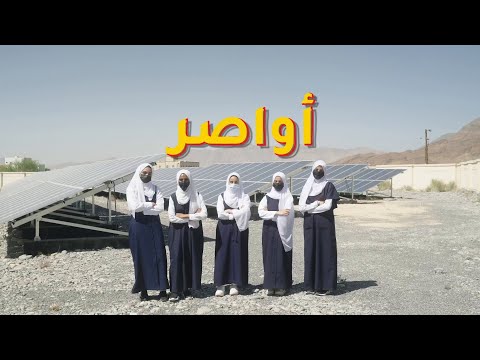 Nxplorers students reimagine a banana as a thriving ecosystem.

Awasir team worked hard to raise awareness of the importance of their project and its long-term impact. The initiative aimed to restore the town's heritage of banana trees plantations, which has enormous significance for the local community.

A schoolgirl stand up in a middle of green farm

{ Our journey today begins from Niyabat Birkat Almooz, an ancient town, located at the heart of Al Dakhiliyah Governorate and considered as a gate to Al Jabal Al Akhdar.}

[School girl in her living room wearing school uniform. She put her book inside the school bag, and She closes her bag]

Sound of the bag zipper while she closes the bag]

Then she walks outside the room.]

Since we were kids, we thought nature is an unchanging entity}

[A View of the sky with the appearance of many Palm trees branches and sunshine. ]

[An elongated road in the middle of the palm farms ]

[Video clips of the Water Flajes in the green farms ]

{ But everything around us changes by time

[school girl wearing her uniform and checking Banana tree in the farm . ]

{ to make our present a sustainable future }

[3 school girls with school uniform chatting and walking in a green farm with a lot of baba trees. The girls touch banana trees by their hands while walking through ]

Voice over for an old man talking about banana benefits

[two girls wearing black mask in school lab. One of them is using a microscope]

{There are many benefits of banana trees

They are rich with vitamins and potassium

and other elements necessary for nurturing the body

Also, banana residue is used as fodder for animals}

{Khamis Mansoor Khamis Al Dughaishi} will be the voiceover

[ Shot for school yard with some students walk through ]

[ Awaser word displayed with Yellow Bold showing above the girls]

{ We are Awaser team, and today we will tell you about our journey in Shell NXplorers program and how we were able to revive our ancient heritage that was endangered}

[Conversation/ Why they chose this project]

But as time passed, The number of banana trees started to decrease gradually }

[Two girls with masks speaking to each other ]

Hence, Awaser came up with the idea of planting banana trees To bring everything back to where it was, And Nxplorers program helped us see things from another perspective

[Girl looking into the microscope]

Therefore, we created this project that will focus on planting banana trees and taking care of them.

{ During a workshop, we used many tools For example; Ripple Effect Mapping Which helped us figure the positive & negative impacts of the project Then we used the Feasibility funnel Through which we came up with the project concept Next, we used Persuasion Pyramid And lastly, we used Scamper tool.

[Girl stick in Nxplorers tools in creative board

[ Drone shot for the solar panels in the school]

{ Also, the school principal had met village Sheikhs to introduce team and their objectives

For which they provided their material and moral support

[ text of Football name shows in both languages]

{ scene transition for the same old man / farmer in his farm}

As we inherited growing banana trees from our fathers We will continue passing on this legacy to our children and continue preserving it.

[ two girls in front of the solar panels smiling ]